Every time I want to change something with my Windows 10 autostart I find myself pondering where the hell do you do this in Windows 10 again?

Next time I know where to look. Here’s how to do it:

This will open an Explorer window in the right directory where you can place links to programs which should start on login.

The path looks like this, replace USERNAME with your actual user name:

dnfdragora-updater is responsible to look for new package updates to your system. By default it is configured to do so every 180 minutes.

The problem is, it will from time to time begin to eat 100% of a cpu core for nothing and slow down the system. So, what can you do about it?

END_OF_DOCUMENT_TOKEN_TO_BE_REPLACED

It is a never ending story. New dist release, new problems with Virtualbox.

What is the current problem with a Fedora 30 guest on a Windows host and Virtualbox 6.0.8? Well, the guest additions won’t work, especially vboxadd.service refuses to start.

After asking my search engine of choice it revealed the libxcrypt to be the culprit. There are some changes mentioned at https://fedoraproject.org/wiki/Releases/30/ChangeSet and it is referenced at https://forums.virtualbox.org/viewtopic.php?f=3&t=92953.

Install the libxcrypt-compat package and the vboxadd.service will start again, problem fixed.

This piece of hardware is from 1996. I found it in our old server room parked under a table next to a box with cables and rack equipment.

And then I remembered the time when I sat in front of it, doing sysadmin stuff with Novell Netware 4.2. Oh my, this was a long time ago!

What do you do if you find such a long forgotten treasure? You want to see if it will boot your favorite OS from back then, right? And it booted really fast into a DOS prompt: C:\>

As it turned out, the PC Server was in very good shape, fully functional and booting super fast. Even the CMOS battery was alive. Wow.

Awestruck as I was I shut it down (well, I just hit power-off as in the good old days) and put it back under the table. There it is waiting for someone else cleaning up and wondering if it will boot one more time …

A quick overview of the most useful vagrant commands.

How to return to a previous version of a vagrant basebox

But suddenly I had huge problems with my left mouse button. In some windows it worked, in others it didn’t and vice versa. After trying random things, it worked for some time, then stopped again. Or didn’t work at all.

The system was actually unusable any more.

It took some time until I realized this strange behaviour was caused by the latest kernel update to 4.17

As soon as it was clear I just had to use the old 4.16 kernel the next steps where easy.

END_OF_DOCUMENT_TOKEN_TO_BE_REPLACED

I have been using Let’s Encrypt SSL/TLS certificates since they where available in open beta. Because back then there wasn’t any packaged client to obtain your certs I went with the letsencrypt and later certbot Github vanilla install.

That worked very well but is was a little bit cumbersome. The benefit was primarily to be up to date with the latest version and features.

To update certbot and pull in any changes just run git:

Over time, your local clone of certbot clutters with stale branches. That’s not really a problem. But if you want it tidy you might run an occasional git remote prune origin after your pull.

Today certbot is available in all major Linux distributions.
But if you want the latest and greatest it might be necessary to pick a specific repository.

Ubuntu 16.04 with the latest certbot

In Ubuntu Xenial aka 16.04 there is an PPA with up to date versions available. To install, run:

This cronjob reliably renews any due certificates. Awesome.

My windows manager of choice for Linux is XFCE.

While working in XFCE I realized that I got so accustomed to the Windows 10 keyboard shortcuts for tiling windows, I wanted to have the same functionality in XFCE.

And it is no problem to make that happen.

Just go to Settings -> Windows Manager -> select the Keyboard tab. Then scroll down to “Tile windows to the …”, mark the entry you want to change and click the “Edit” button. Follow the instructions.

To tile the window to the left enter: <Super(Windows key)> + <left arrow> 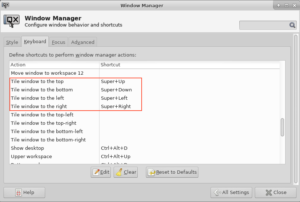 To define a name for use in directives during Apache startup is an easy way to control the behavior of the webserver depending on your environment specifics.

This way you can have different configurations applied according to the context, facts you have or variables you set. It is possible to distinguish between production and development, detected facts, the hostname or a context string.
And you can have your apache config stored in a git repository which is used on two or more webservers to propagate changes easily between hosts.

These are the two use cases I want to look into:

How would you do this?

END_OF_DOCUMENT_TOKEN_TO_BE_REPLACED

Here I want to focus on a few keystrokes which help to adjust where your current line appears on your screen in Normal mode.

You can display the screen at center even while you are in Insert mode. No need to leave Insert mode, center the screen and reenter Insert mode. That’s especially helpful if you just want to see more context above and beneath your current position.